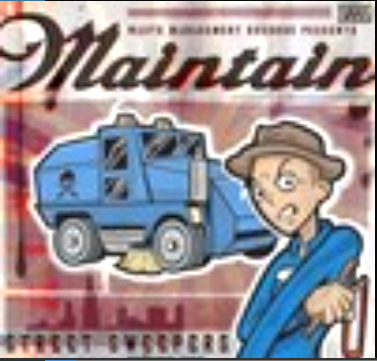 Maintain As an emerging rapper from the Midwest, who continues to keep us wanting more of his true-to-hip-hop gangster flows, experience inspired hip-hop crossovers, and cunningly shocking heart felt lyrics and comedic punch lines, Maintain is taking the hip-hop world by choice or by force. In an ever evolving industry, Maintain has chosen to stay true to himself and primarily true to his style which he considers a throw back to the era of “real” hip-hop.

Maintain was born Benjamin Scott Hahs on May 5th, 1975 in the northwestern Chicago suburb of Elgin, IL. Growing up, Ben never knew his father, and was raised in his early years by his single parent teenaged mother. Around the age of ten, and as time went on, raising a son alone proved to be a difficult and overwhelming task for his young mother, and Ben spent the remainder of his youth being raised by his grandmother and other close family members. It was at this point that Maintain began using rap as therapy and his pen and notebook as a means of escape. Hip-Hop was one few things that made sense to him. Ben’s early life experiences, family dynamic, and him being exposed to different races, ethnicities and cultures and their music, would later prove to be both beneficial and influential in his decision to pursue rap as a career. Although Maintain considers Elgin, IL his hometown, part of his upbringing also included moving from town to town and place to place throughout Chicago’s northwest and southwest suburbs.

In addition, he also spent numerous summer vacations in Cape Girardeau, MO (a suburb of St. Louis); and though it was supposed to be an escape from city life, it added fuel to the fire by being one of the nation’s High Intensity Drug Trafficking Areas (HIDTA) due Midwest drug routes and gang violence. More often than not, these places brought him either very close to or in the midst of low income, crime ridden, gang and drug infested neighborhoods. As a result, life situations forced him to adapt and become a product of his surroundings. In a world of “get or be got”, and survival of the fittest, Ben was forced to quickly learn rules of the game. In short, he learned to “Maintain,” a name he took as a reminder to keep cool under fire- it’s who he is and what he does. With trouble being close at hand, Maintain’s youth included being kicked out school, several run-ins with police, and gang violence claiming the life of some of his friends and also that of two of his closest friends whom he also later named his son after (Chris Leshaun). At that point, Maintain had a decision to make; his rage and disappointments with life could either become violent actions or creative genius which cultivated powerful hip-hop. Throughout his early years, Maintain had been rapping to himself, and poetically journaling his emotions and life experiences. To this he credits numerous lyrical influences and inspirations such as Tupac, Eric B & Rakim, Big Daddy Kane, and Ice Cube to name a few. As he approached his teenage years, he began changing life to art by putting his clever lines and hooks to dope beats; and at about the age of thirteen, it became apparent to others that he had two God given gifts and talents-not only could he write, but this weird white kid from the ‘burbs’ could rap! As he grew older and his music matured, Maintain began performing and quickly earned a name for himself. It wasn’t long before Chicago’s underground rap scene knew him and recognized his hustle and flow. Regarding his early adult life experiences, many of his tracks are also laced with mentions of both his grandmother, Goldie, and his son Chris. With his grandmother’s recent passing (November 2008), much of what he experienced being raised with her, and also being a father to his son, has become inspiration, determination and drive for his pursuit. Maintain made his first album with nine friends who called themselves the Rec Center and was proud of the 3,000 copies they sold in the Chicago scene. Since then, he has recorded over 200 songs and also collaborated on tracks with other artists including hip-hop mainstay Canibus and up and coming R&B artist J.Hollins.

When listening to the lyrics of many of his tracks there are also numerous mentions of his grandmother, Goldie and also his sonRegarding other hip-hop artists with whom he would consider himself comparable, Maintain believes he has a unique style which is not to be contrasted, but rather in terms of talent, ingenuity and business sense could be equated to such hip-hop icons as Jay-Z, 50 Cent, and Eminem. He has also been mentored by hip-hop legend K-Solo who also signed him to his first recording contract with Waste Management Records. Currently unsigned, Maintain spends the majority of his time working with producers and other artists, recording tracks and writing.

When asked about current hip-hop icons and who he might Though he would welcome any record deal offered along with the opportunity to take his career to another level, Maintain prides himself in his love and passion for hip-hop which for him equates to longevity. Rather than rating his success according to album sales and monetary gains he measures his accomplishments in terms of the amount of heart, soul, effort and enthusiasm he puts into his work.